We have been busy the last few weeks, mainly working outside landscaping the garden.
As usual though, I have been pottering and rearranging a few little things here and there in the living rooms and dining room. Its a disease!! I have about an hour when I get home after a night shift before Euan gets home from his and its my 'pottering' time.
A few wee things have changed, we put up a mantle shelf and got the door frame on.  Still got that hideous central light fitting! 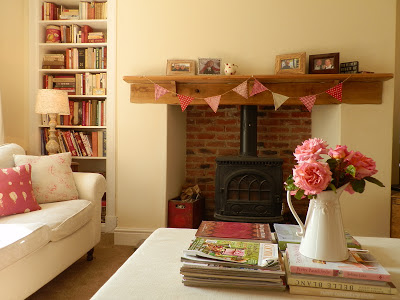 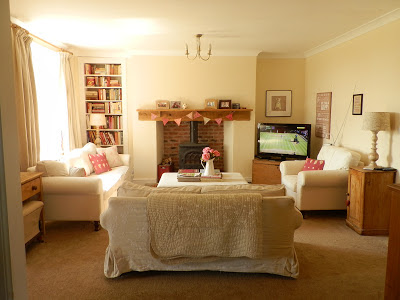 Watching the tennis yesterday afternoon as you can see......isnt the huge old style TV aerial a delight?? We dont have one on the roof yet.
Its the final today and I feel nervous already.....especially after watching poor Lisicki loose.
Come on Andy!!!


We have quite a big garden with virtually nothing in it, I could count on one hand the number of plants.
There is one beautiful rose though, growing against a wall and I picked some blooms for the house.
They smell as gorgeous as they look and it was lovely to be able to pick something from the garden instead of buying flowers. 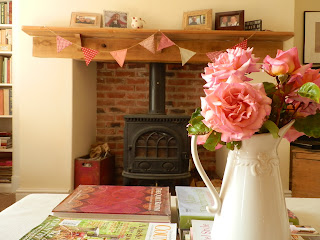 I dream that the garden will one day be full of flowers like this.........but for this year our goal is to get it landscaped, tidy and ready for planting things next year.
Our to do list is......


We had some help from a digger to get the pond filled in finally.
We removed the fake fur from inside it and sold the 'porn shed!' on Gumtree (We did not share our thoughts on what the previous owners of our house had been doing in there!) and we dismantled the decking underneath.That was a job and a half....my arms are seriously beginning to resemble Popeyes. Everything at the moment is heavy lifting and lugging rocks, digging, pushing loaded wheelbarrows.....its safe to say that my dreams of flitting around my country garden in a Cath Kidston dress aint happening any time soon!!! 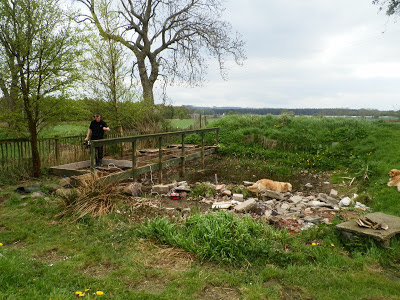 We had let the water drain away since last Autumn and evacuated the newts (hundreds of them) and frogs to the local pond, using the hole as a dump for rubble in the mean time.Its been an eye sore for months now.
It was a bit mesmerising watching the digger make light work of such a big job......but eventually, the pond and big bank were no more. 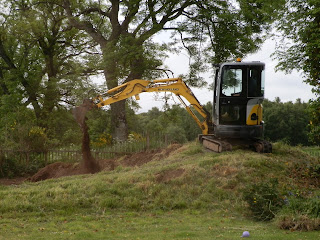 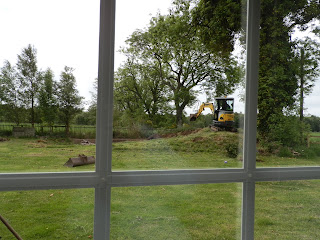 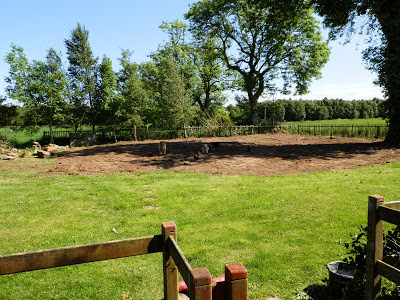 We were left with this- the dogs and chickens were straight on it to investigate. We have sewn grass seed in that area for now.

After a few days of trying to dig the trench for the retaining wall foundations out ourselves with spades, we admitted defeat and called the digger back- its took him 2 hours to do the whole thing which would have taken us a few weeks- its mostly clay so it was very slow going by hand- a total nightmare. Beautiful isn't it?! 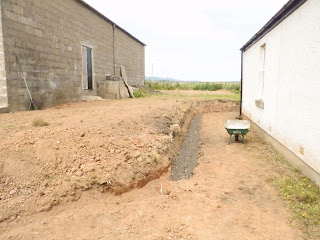 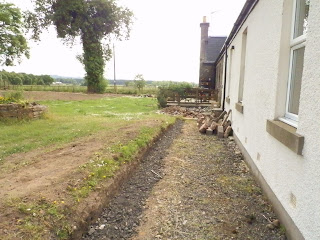 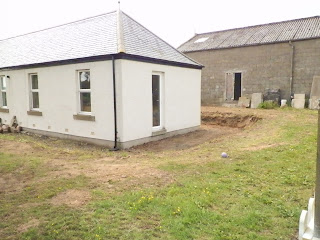 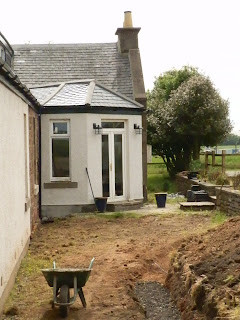 So outside pretty much looks like a right mess just now. But its progress and that is exciting.

We have reused some timber from the old pond decking to begin making the veg plot.
Euan and I are big fans of River Cottage and have been dreaming of having something like that and growing as much ourselves as possible.We know next to nothing about growing vegetables! I bought an Alan Titchmarsh book on Amazon last week and figure, we will learn by our mistakes.
I pictured in my head a really pretty white picket fenced area with raised beds in it and little gravel paths in between so we have been building this area little bit at a time.

I will put on some pictures when the veg plot is all finished. 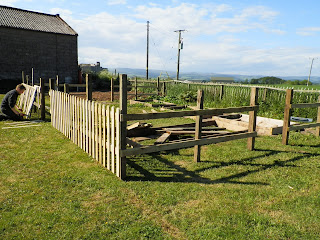 Its going to be so nice but, I think by the time we have completed it, we will have missed the time to plant a lot of things for this year. But it will be waiting, all ready to go next Spring.

I am off the sleep now after my night shift........Have a super weekend and if you are a tennis fan- I too will be screaming at the TV and hiding behind a cushion later on xx

Thanks so much for leaving comments.........its nice to know that someone reads the blog xx

Please have a look at these beautiful dogs of all breeds and ages looking for homes.

Thinking of getting a Cat? 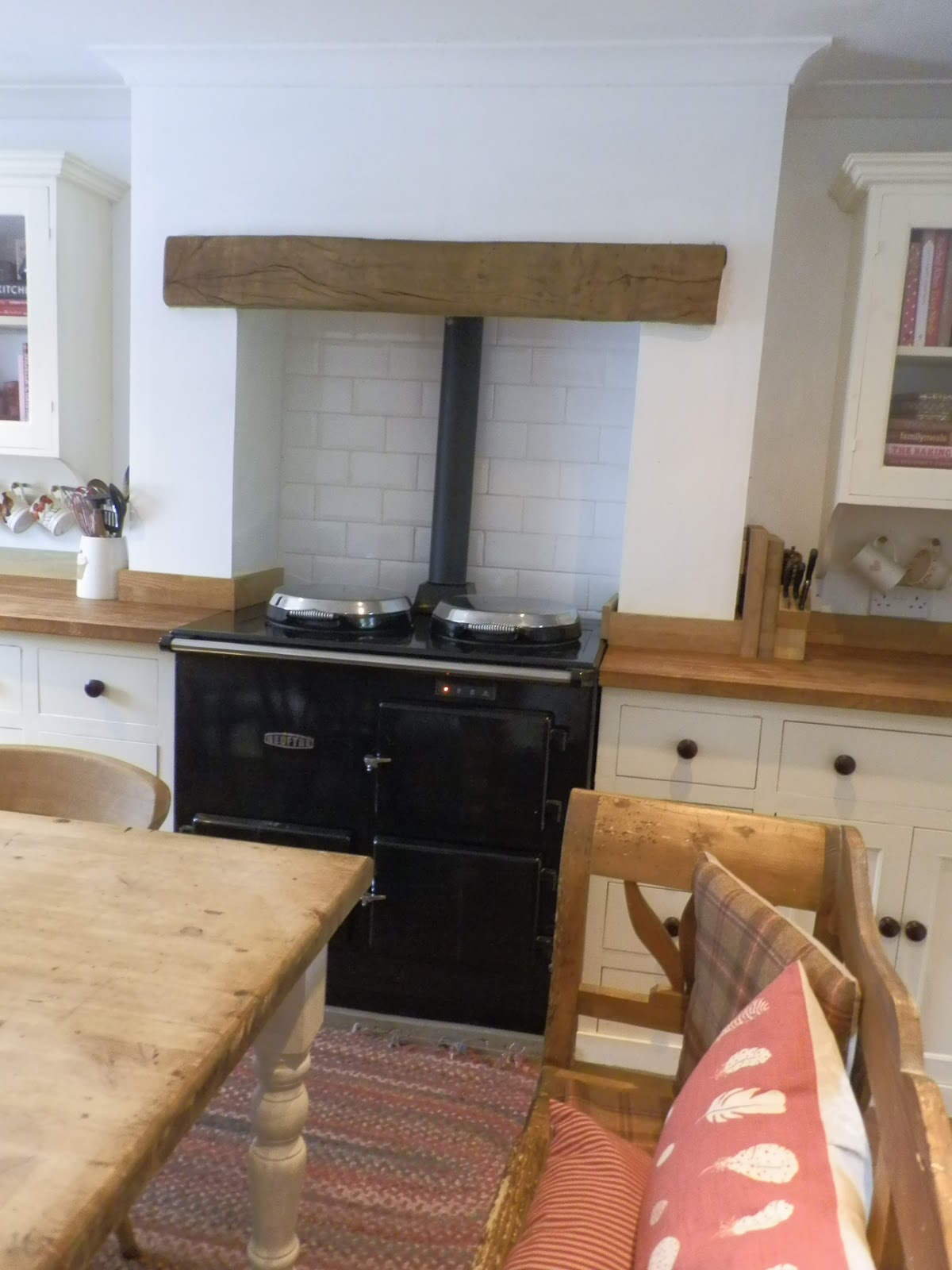 I love reading other blogs; it reminds me that there are still great people in this world, who are kind to others and kind to animals. Its even better to find that these people love all the same kinds of things that I do! 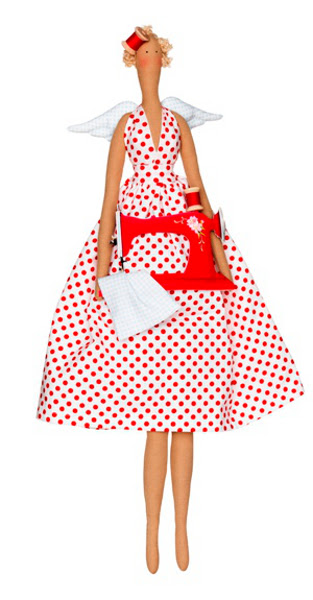 Never too old to love these guys x

Hayley
I live with Euan and a big family of four-legged and feathered friends in a victorian farmhouse in Scotland. My blog is a diary of the renovations and of our adventures as we make it a home.

I couldnt write this blog alone, its a team effort, behind the scenes are........

I collect smelly socks and tea towels.I love to roll in chicken poop, chew mums plants, drink mugs of tea from the coffee table and snooze on the sofa.

I love digging holes in the lawn, shredding underwear and stealing cutlery from the table and then parading my treasure in front of Mum and Dad.I have enormous ears and a heart to match.

I love to tag along on dog walks in the woods. I got my name because I am so handsome but I'm afraid you wouldnt catch me anywhere near a pond in my undergarments -Sorry girls! 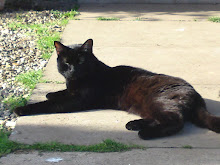 I love carrier bags, boxes, open drawers and helping myself to the contents of the fridge when everyones gone to bed.

I need Mum or Dad to hold the catflap open for me. I do my research from thier bed, where I can be found most days. 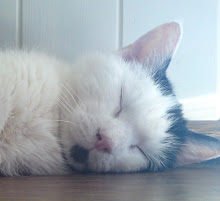 Affectionately known as 'the old man', after a few years of a happy retirement with us, our wee elderly rescue cat went up to heaven on March 29th.Miss you old man x

Maggie and Molly in front of the fire